The majority of the world's water is undrinkable and found in the oceans and seas. A percentage is also frozen away in the polar icecaps. So one can imagine just how desperate the water situation really is and has the potential to become in the coming generations. Thankfully, there is a process called desalination where fresh water can be made from salt water.

Desalination is defined as the removing of salt and minerals from sea water to make it suitable for human consumption & industrial use. This is mostly by employing reverse osmosis to force salt water through membranes that allow water molecules to pass but blocks the molecules of salt & minerals.

Unlike direct osmosis, which is the natural tendency of pure water to flow through a membrane into impure water, reverse osmosis is achieved by applying very high pressure to seawater to counteract the osmotic flow. Thus, seawater is forced through a semi-permeable membrane, or TFC spiral RO membrane, which removes all the  dissolved solids and produces fresh, potable water on the other side.

The high pressure pump supplies the required force to drive the feed water through the semi-permeable reverse osmosis membrane. An automatic high pressure safety relief valve protects the water maker if pressure exceeds recommended levels. In seawater desalination systems, the working pressure is between 750 psi to 1000 psi. Ultimately, this desalination method rejects at least 99% of salts, contaminates, and pollutants from seawater.

A desalination plant is a huge project to undertake. To this day, the desalination process remains very costly, and requires a great deal of energy. They can range in size depending on the need and requirements of a region. The largest desalination plant in the world is located in the United Arab Emirates. It produces up to 300 million cubic meters per year of clean water.

The largest one in the United States is located in Tampa Bay, Florida. That one produces up to 34.7 million cubic meters of clean water per year. As you can see, the amounts are different as the needs of the two regions are extremely different. The United States is also one of the most important users of desalinated water (6.5%), especially in California and Florida (either for industrial use or to supply fresh water).

With thousands of operating systems all around the world, Pure Aqua, Inc. has introduced a new style of desalination systems also known as watermakers for the Marine industry and other related applications. Converting Sea Water to pure drinking water for drinking water applications, yachts, industrial applications and commercial freightliners all over the world.

Here are some common desalination applications:

Pure Aqua, Inc. manufactures and integrates marine-grade materials that utilize the process of desalination, with special craftsman attention to detail. Our expertise in desalination is very much needed in a world where the population increase is rapidly endangering the small percentage of drinkable water this planet has to offer.

For this very reason alone, the knowledgeable staff and engineers at Pure Aqua, Inc. have dedicated themselves to the business of water desalination. With many years of dedicated experience and water knowledge, our team is ready and able to take on the water crisis.

* The recommended reverse osmosis systems for seawater desalination for commercial & industrial purposes are: 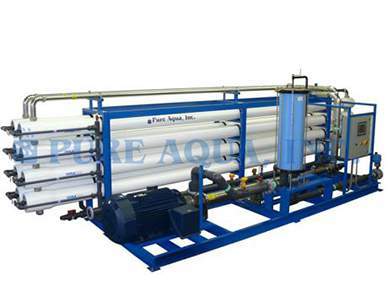 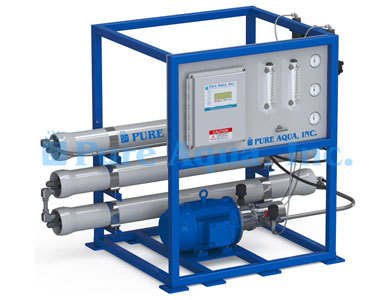 * Other methods used to remove salt from seawater and convert it to drinkable water are: