The fundamental principle of Nanofiltration membrane's technology is the use of pressure to separate soluble ions from water through a semi permeable membrane. The membrane, operates under a different hydraulic profile which is also known cross flow filtration, unlike a dead end filter.

Most Nanofiltration membranes are composite materials supported by polymer substrate and manufactured in a spiral design as opposed to a flat sheet or tube geometry. The predominant model used today for industrial applications is the spiral configuration. To ascertain further understanding of nanofiltration systems, you will need to be aware of the following information.

Like RO, and unlike UF, Nanofiltration Systems will recover a percentage of the feed water. Most all NF membranes are of a spiral wound configuration. 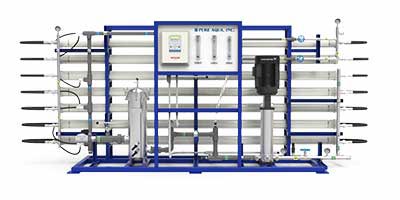 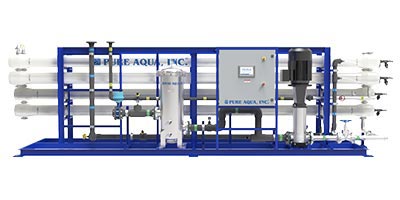 Pure Aqua has over 20 years of experience as a global supplier of industrial and commercial nanofiltration systems for the removal of unwanted impurities from water. Our NF systems ensure the production of clean and potable water for any type of application in the water treatment industry. Check out our selection of nanofiltration systems for commercial establishments and industrial plants to meet your water treatment needs.

Nanofiltration (NF), in water treatment, “bridges” a gap between ultrafiltration and reverse osmosis membranes. It is sometimes referred to as a loose or lower rejecting RO membrane. It could also be called a tight UF, as NF membrane pore size ranges from .01 to a little less than .001. Generally, an NF membrane system lets more salt pass than an RO membrane. In addition, an NF membrane element will produce the same quantity of product at 50 to 70% the applied pressure as an RO water treatment system.

There are applications where a 75% rate of salt rejection is preferable to 95 to 99%, especially when it is achieved using only half of the energy. Unlike with RO membrane elements, the NF offerings of the major membrane manufacturers are quite different in performance from company to company. With RO membrane elements, any model with less than 99.5% sodium chloride rejection, especially with seawater membranes, is considered inferior. In the case of NF, there is a “place” for any membrane with a NaCl rejection rate of 40%, or more. Nanofiltration has also been called a “softening” membrane as while its salt rejection may be 80% or less, hardness rejection will often remain well over 90%.

What is nanofiltration membrane?

Difference between nanofiltration and reverse osmosis?

While up to 99% of chlorides and sodium are removed by reverse osmosis systems, nanofiltration membranes typically remove only 50% to 80%. This percentage relies on the type of material and manufacturing of the membrane. However, due to its effectiveness in removing multiple charge ions, nanofiltration is the preferred choice for removing hardness from water while not affecting the total dissolved solids content than would reverse osmosis.